Jake Gyllenhaal takes a sledgehammer to his grief in the flawed but well-acted DEMOLITION. It’s the story of Manhattan investment broker Davis Mitchell (Gyllenhaal), whose wife, Julia (Heather Lind), is killed in a car wreck while they’re arguing about a leaky refrigerator. Davis is uninjured and, while waiting in the emergency room’s lobby, has an encounter with a vending machine there that fails to properly dispense his peanut M&Ms. He feels little in terms of anguish over the sudden loss of his wife, even returning to work the next day. It’s that denied bag of candy that really gets under his skin so he begins writing to the vending company’s customer complaint department — long, personal letters that become a narrative device illustrating Davis’ state of mind. On the receiving end of his rants is the vending company’s owner’s wife Karen Moreno (Naomi Watts), the pot smoking mother of foul-mouthed 15-year old Chris (Judah Lewis)......

“So we can’t call Ripley’s Believe it or Not, because… they wouldn’t believe it.”

Without doubt one of the very best animated films of the past twenty years, Brad Bird’s THE IRON GIANT (1999) is a fabulous love letter to 1950s science fiction b-movies and b-fiction. The central figure is as grand and cool a physical design for a robot as ever put on film; perfectly balanced with the character of the robot.

The Iron Giant (voiced by Vin Diesel), befriended by a young boy named Hogarth (voiced by Eli Marienthal) who is himself a SF b-movie junkie during the reactionary 1950s time period, engages the boy and his beatnik confidant Dean McCoppin (Harry Connick) with his trust. The Iron Giant comes to understand his own nature, the possibility of becoming a deadly weapon and a “monster” from the boy’s comic books, and his understanding of heroism and love for his friends. 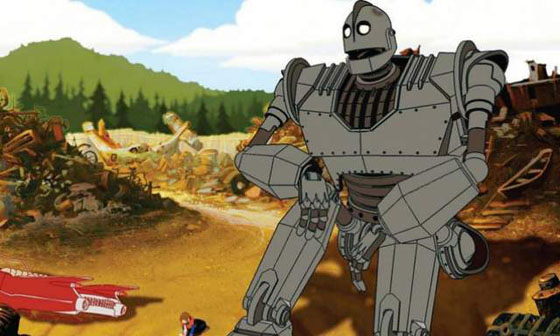 THE IRON GIANT has a wonderful nostalgic, small-town atmosphere that is brought to life by the stunning animation. The attention to period detail, from the cheesy educational videos that Hogarth’s class is forced to watch, to the way townspeople talk, is faithfully recreated and really goes a long way to drawing you in. 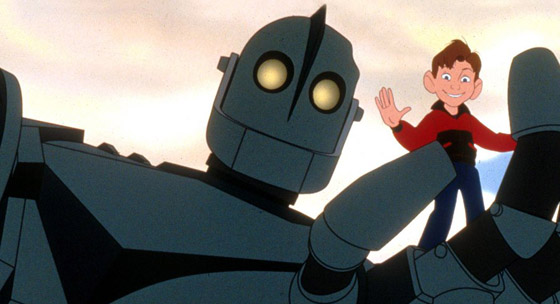 THE IRON GIANT is one of those rare animated films that appeals to both children and adults, that doesn’t contain one annoying musical number a la Disney, and that isn’t one long advertisement for a toy. In fact, this film is an entertaining, even touching, story about tolerance and compassion and now you’ll have the chance to see it again on the big screen when it plays Friday night at 9:30 Webster University’s Moore Auditorium. It’s part of Webster Us’ Kinematifest 9 – The International Animation and Interactive Media Festival. (for more about Kinematifest, go to their site HERE)

The screening is FREE!

THE BOSS, MIDNIGHT SPECIAL, HARDCORE HENRY and More on the New WE ARE MOVIE GEEKS Podcast

This week’s episode of our podcast WE ARE MOVIE GEEKS The Show is up! Hear WAMG’s Michelle McCue, Jim Batts and Tom Stockman discuss the weekend box office. We’ll review FOUR COLOR EULOGY, THE BOSS, MIDNIGHT SPECIAL, and what we saw of HARDCORE HENRY . We’ll also discuss funny ladies on the silver screen.

THE PASSION OF JOAN OF ARC (1928) Screens at 7:30 Saturday March 19th at Winifred Moore Auditorium on the campus of Webster University with live accompaniment by the Rats & People Motion Picture Orchestra and an introduction and post-film discussion by Andrew Wyatt, film critic for St. Louis Magazine’s Look/Listen arts-and-entertainment blog and the Gateway Cinephile film blog.

Silent films with live music! There’s nothing like it and St. Louis is lucky to have The Rats and People Motion Picture Orchestra here. For the past several years, The Rats and People have actively defined both the local music and film cultures of our city. In addition to its prolific composition and live performance of new scores for films of the silent era, the ensemble – equal parts indie/punk-stalwart and classically trained composers/musicians – have provided the soundtrack for many of St. Louis’ most vital and acclaimed locally-produced contemporary films.

BROTHERS GRIMSBY, 10 CLOVERFIELD LANE and More on the New WE ARE MOVIE GEEKS Podcast

This week’s episode of our podcast WE ARE MOVIE GEEKS The Show is up! Hear WAMG’s Michelle McCue, Jim Batts and Tom Stockman discuss the weekend box office. We’ll review OTHER SIDE OF THE DOOR, EYE IN THE SKY, BROTHERS GRIMSBY, CREATIVE CONTROL, 10 CLOVERFIELD LANE, MIRACLES FROM HEAVEN, THE BRONZE and HELLO MY NAME IS DORIS. We’ll preview 10 the newest film in the DIVERGENT series and talk about how excited we are about the new CAPTAIN AMERICA CIVIL WAR trailer.

MIRACLES FROM HEAVEN explores issues of family and faith while telling the true tale of Texan Christy Beam (played by Jennifer Garner) that begins when her 10-year old daughter Anna (Kylie Rogers) develops horrible stomach pain. The child is initially misdiagnosed, and when her disorder is discovered to be an incurable, and ultimately fatal, digestive disease, Christy finds herself a fierce advocate for Anna’s health. She travels to Boston frequently to work with Dr. Nirko (Eugenio Derbez), apparently the only specialist in the country who can help. Back home, Christy’s husband Kevin (Martin Henderson) does his best to hold down the fort with their other two daughters while dealing with impending financial stress. After a freak accident involving a hollow tree and a glimpse of God and Heaven, a miracle unfolds that leaves doctors confounded and the Beam’s small-town community inspired......

RISEN is a modest but engaging riff on the old post-crucifixion Easter legend as told through the eyes of a non-believer. In 33 AD Jerusalem, Roman occupiers are under threat of a Jewish uprising. The Jews claim a Nazarene named Yeshua (aka Jesus – played by Clifton Curtis) is the Messiah, so Pontius Pilate (Peter Firth) promptly has him crucified, then orders Roman officer Clavius (Joseph Fiennes) to witness the execution and help dispose of the body. Three days later Jesus’ corpse has vanished from its cave tomb, though the entrance was blocked with a boulder and watched by guards. Pilate orders Clavius and Lucius (Tom Felton), to find Jesus and his disciples at all costs, for fear that if they don’t quickly produce a corpse, the Jews will rise up.  Thus begins a manhunt of biblical proportions........

EDDIE THE EAGLE, RISEN, and Oscar Predictions on This Week's WE ARE MOVIE GEEKS Podcast

This week’s episode of our podcast WE ARE MOVIE GEEKS The Show is up! Hear WAMG’s Michelle McCue, Jim Batts and Tom Stockman discuss the weekend box office. We’ll review RISEN, EDDIE THE EAGLE, A WAR, and TOUCHED WITH FIRE. We’ll preview ZOOTOPIA and TRIPLE 9 and we will make our predictions on who will win all of the Oscars next Sunday night.

The 9th annual Africa World Documentary Film Festival, sponsored by the E. Desmond Lee Professorship in African/African American Studies at the International Studies and Programs Office, University of Missouri-St. Louis, will run from Friday, February 5, to Sunday, February 7 at the Missouri History Museum, 5700 Lindell Blvd (63112). This international festival is committed to promoting knowledge of the life and culture of the people of Africa worldwide, in a cinematic Pan-African context. During its St. Louis run, the festival will feature 14 films from nine countries, including South Africa, Ethiopia, Kenya, South Sudan, China and the United States. This event is free and open to the public. Middle and high school students from St. Louis area, (including students from Pamoja Preparatory Academy - an African centered St. Louis Public School), are expected to attend the opening day of the festival.

Movie Review - Kevin Hart and Ice Cube in RIDE ALONG 2 If you enjoyed RIDE ALONG, you'll like RIDE ALONG 2 - it's as simple as that. Fast-talking stand-up Kevin Hart and gruff straight man Ice Cube bicker like an old couple all the way to the bank as they play off each other's delivery styles to lively effect, but this weak follow-up to the 2014 hit is basically a series of disposable action sequences loosely connected by the presence of its two stars. What you saw in the predecessor and see in RIDE ALONG 2's trailers is what you get: plenty of routine action, lots of Kevin Hart sass, and not much else....