St. Louis theatre calendar for the week of February 25, 2019

New shows this week include La Cage aux Folles at New Line, The Misanthrope at St. Louis Univeristy, and Well at Mustard Seed. 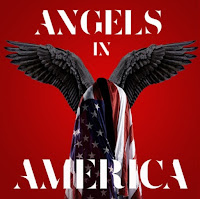 The Performing Arts Department at Washington University presents Angels in America, Part 1: Millennium Approaches Thursdays and Fridays at 7 pm, Saturday at 2 and 8 pm, and Sundays at 2 pm through March 3. "Perhaps Jack Kroll in Newsweek described Millennium Approaches best: "The most ambitious American play of our time: an epic that ranges from earth to heaven; focuses on politics, sex and religion; transports us to Washington, the Kremlin, the South Bronx, Salt Lake City and Antarctica; deals with Jews, Mormons, WASPs, blacks; switches between realism and fantasy, from the tragedy of AIDS to the camp comedy of drag queens to the death or at least the absconding of God." The performances take place in the Edison Theatre on the Washington University campus. For more information, call 314-935-6543 or visit pad.artsci.wustl.edu.

The Playhouse at Westport Plaza presents the musical Avenue Q running through March 17. "Part flesh, part felt and packed with heart, AVENUE Q is a laugh-out-loud musical telling the timeless story of a bright-eyed college grad named Princeton. When he arrives in the city with big dreams and a tiny bank account, he has to move into a shabby apartment all the way out on AVENUE Q. Still, the neighbors seem nice. There, he meets Kate (the girl next door), Lucy (the slut), Rod (the Republican), Trekkie (the internet entrepreneur), superintendent Gary Coleman (yes, that Gary Coleman) and other new friends! Together, they struggle to find jobs, dates, and their ever-elusive purpose in life." The Playhouse at Westport Plaza is at 635 West Port Plaza. For more information: www.playhouseatwestport.com.

The Lemp Mansion Comedy-Mystery Dinner Theater presents Bullets in the Bathtub through April 13. The Lemp Mansion is at 3322 DeMenil Place. For more information: lempmansion.com.

New Line Theatre presents the musical La Cage aux Folles Thursdays through Saturdays at 8 PM, February 28 - March 23. "What happens when the son of a middle-aged gay couple brings home the daughter of an arch-conservative politician -- and her parents -- for dinner? Musical comedy ensues. Come join us on the French Riviera for a night of love, laughs, illusions and truths, and the triumph of family over bullies and bigots." Performances take place at the Marcelle Theater, 3310 Samuel Shepard Drive, three blocks east of Grand, in Grand Center. For more information, visit newlinetheatre.com or call 314-534-1111.

CSZ St. Louis presents The ComedySportz Show on Saturday nights at 7:30 pm. The show is "action-packed, interactive and hilarious comedy played as a sport. Two teams battle it out for points and your laughs! You choose the winners the teams provide the funny!" Performances take place on the second floor of the Sugar Cubed, 917 S Main St. in St Charles, Mo. For more information: www.cszstlouis.com.

Over Due Theatre presents Stephen Sondheim's musical Company Fridays and Saturdays at 8 pm and Sundays at 2 pm, March 1-10. . “Phone rings, door chimes, in comes Company! First produced in 1970, Company was nominated for a record-setting fourteen Tony Awards and won six, including Best Musical. Company takes an unvarnished look at marriage through the eyes of Bobby who, unmarried on his thirty-fifth birthday, finds himself lost in the company of his married friends. With his trademark wit and sophistication, Stephen Sondheim examines the flawed nature of human relationships as Bobby journeys towards the realization that, in spite of all of his friends' failings, there is no point in “Being Alive” unless he has someone with whom to share it.” Performances take place at the Olivette Community Center, 9723 Grandview Drive, in Olivette, MO. For more information, call 314-210-2959 or visit overduetheatrecompany.com.

Alton Little Theater presents The Glitter Girls Fridays and Saturdays at 7:30 pm and Sundays at 2 pm, January 18-27. "A brand new play economically described as STEEL MAGNOLIAS meets SURVIVOR, with a big dose of quirky humor thrown in for good measure. A strong ensemble play which questions the wisdom of sudden wealth and the bonds of friendship. " Performances take place at 2450 North Henry in Alton, IL. For more information, call 618.462.6562 or visit altonlittletheater.org.

The Black Rep presents Milk Like Sugar opening on Wednesday, February 13, and running through March 3. "Milk Like Sugar is an astute gut-wrenching observation of the impact of racism on African American youth. We see the cyclical nature of inherited trauma, the normalization of underfunded communities, the dire need for education that nurtures latent talent, childhood hunger, the categorization of Black youth as adults, and the injustice of the criminal system. The myth of self-determination and seeing those who cannot escape their circumstance as inferior is keeping us for mobilizing and tithing whatever time and talent we might have to give into those communities. This play affirms these children need us, just as much as we need them." Performances take place at the Hotchner Studio Theatre on the Washington University campus. For more information: theblackrep.org.

The University Theatre at Saint Louis University presents Moliere's comedy The Misanthrope Thursday through Saturday at 8 pm and Sunday at 2 pm, February 28 - March 3. This Molière classic looks at the hypocrisy of society and the consequences of total honesty and will be directed by Lucy Cashion. Note that unfilled seats will be released 7 minutes prior to the start of the show. Performances take place at the Kranzberg Arts Center Black Box Theatre, 501 N. Grand in Grand Center. For more information: metrotix.com or call 314.534-1111.

The Theatre Guild of Webster Groves presents the drama One Flew Over the Cuckoo's Nest opening on Friday, March 1, at 8 pm and running through March 10. "One Flew Over the Cuckoo's Nest is a chilling, cautionary tale of a charming rogue, Randle Patrick McMurphy, who contrives to serve a short sentence in an airy mental institution rather than prison. This, he learns, was a mistake. He clashes with the head nurse, Nurse Ratched, a fierce martinet. He quickly takes over the yard and accomplishes what the medical profession was unable to do for 12 years, prompt a presumably deaf and dumb Native American patient to speak. Leading the other patients out of their introversion, McMurphy stages a revolt so that they can watch the World Series on television, and arranges a rollicking midnight party. The party is too horrid for Nurse Ratched, who forces a final “correction” on McMurphy, a frontal lobotomy. The play is a 2001 winner of a Tony® Award, for “Outstanding Revival of a Play.” Parental discretion is advised." Performances take place in the Guild theatre at Newport and Summit in Webster Groves, MO. For more information: theatreguildwg.org or call 314-962-0876.

The Repertory Theatre of St. Louis presents the drama Oslo running through March 3. "Winner of the 2017 Tony Award for Best Play. In 1993, two bitter enemies shocked the world by shaking hands and agreeing to work toward peace. This breathtaking drama tells the story of the secretive and precarious negotiations that made that moment possible. By focusing on the Norwegian couple who brokered talks between the Israelis and Palestinians, Oslo finds the unlikely story behind this historic event." Performances take place at the Loretto-Hilton Center on the Webster University campus. For more information: repstl.org

The Fox Theatre presents musical Rock of Ages Friday at 7:30 pm, Saturday at 2 and 7:30 pm, and Sunday at 1 and 6:30 pm, March 1-3. The Fox Theatre is at 527 North Grand in Grand Center. "Nominated for five Tony Awards®, including Best Musical, ROCK OF AGES captures the iconic era that was the big bad 1980s Hollywood. Know What Love Is, Feel the Noise, and Take Your Best Shot at one of the Sunset Strip's last epic venues, a place where the legendary Stacee Jaxx returns to the stage and rock-n-roll dreamers line up to turn their fantasies into reality. Featuring the music of hit bands such as Styx, Poison, Twisted Sister, and Whitesnake among many others, this Tenth Anniversary production features a dynamic new cast revisiting the larger than life characters and exhilarating story that turned ROCK OF AGES into a global phenomenon. This is one for the ages that will have you singing “Here I Go Again.” For more information: fabulousfox.com.

The St. Louis Family Theatre Series presents the Lightwire Theatre Company production of The Ugly Duckling Sunday at 2 pm, March 3 and 9, and Friday at 7:30 pm, March 10. "Lightwire Theater brings a classic tale to the modern stage in an unforgettable theatrical experience. Lined with electroluminescent wire, the beloved story of The Ugly Duckling plays out on stage through a cutting-edge blend of puppetry, technology and dance. With dazzling visuals, poignant choreography and the creative use of music from classical to pop, this production brings this story into a new and brilliant light. " Performances take place at the Florissant Civic Center Theatre at Parker and Waterford in Florissant, MO. For more information, call 314-921-5678 or visit www.florissantmo.com

Mustard Seed Theatre presents Well by Lisa Kron opening on Friday, March 1, at 8 pm and running through March 17. "Lisa's experimental play intends to explore racial and religious integration and cultural concepts of health. She does NOT want to talk about her Mother, who unexpectedly joins her on stage. What could possibly go wrong?" Performances take place at the Fontbonne Fine Arts Theatre, 6800 Wydown Blvd. For more information, call (314) 719-8060 or visit the web site at www.mustardseedtheatre.com.

Looking for auditions and other artistic opportunities? Check out the St. Louis Auditions site.
For information on events beyond this week, check out the searchable database at the Regional Arts Commission's Events Calendar.
Would you like to be on the radio? KDHX, 88.1 FM needs theatre reviewers. If you're 18 years or older, knowledgeable in this area, have practical theatre experience (acting, directing, writing, technical design, etc.), have good oral and written communications skills and would like to become one of our volunteer reviewers, send an email describing your experience and interests to chuck at kdhx.org. Please include a sample review of something you've seen recently.
Published in Chuck Lavazzi
Tagged under